Waiting for Godot by Roger Cummiskey 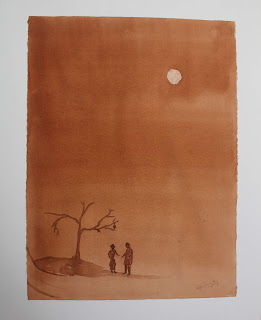 Title:   Waiting For Godot
Artist:  Roger Cummiskey
Medium:  Painting - Watercolor On Paper
Description: I made this original painting to reflect the World famous play by Samuel Beckett, "Waiting for Godot".


Beckett specified the scenery as a tree, a country lane. The two characters in this painting are Vladimir (Didi) and Estragon (Gogo). They are waiting for a guy named Godot who never arrives.

The play opens on an outdoor scene of two bedraggled companions: the philosophical Vladimir and the weary Estragon who, at the moment, cannot remove his boots from his aching feet, finally muttering, "Nothing to be done. Vladimir takes up the thought loftily, while Estragon vaguely recalls having been beaten the night before. Finally, his boots come off, while the pair ramble and bicker pointlessly. When Estragon suddenly decides to leave, Vladimir reminds him that they must stay and wait for an unspecified person called Godot—a segment of dialogue that repeats often. Unfortunately, the pair cannot agree on where or when they are expected to meet with this Godot. They only know to wait at a tree, and there is indeed a leafless one nearby.

Eventually, Estragon dozes off and Vladimir rouses him but then stops him before he can share his dreams—another recurring activity between the two men. Estragon wants to hear an old joke, which Vladimir cannot finish without going off to urinate, since every time he starts laughing, a kidney ailment flares up. Upon Vladimir's return, the increasingly jaded Estragon suggests that they hang themselves, but they abandon the idea when the logistics seem ineffective. They then speculate on the potential rewards of continuing to wait for Godot, but can come to no definite conclusions.[7] When Estragon declares his hunger, Vladimir provides a carrot (among a collection of turnips), at which Estragon idly gnaws, loudly reiterating his boredom.

A terrible cry heralds the entrance of Lucky, a silent, baggage-burdened slave with a rope tied around his neck, and Pozzo, his arrogant and imperious master, who holds the other end and stops now to rest. Pozzo barks abusive orders at Lucky, which are always quietly followed, while acting civilly though tersely towards the other two. Pozzo enjoys a selfish snack of chicken and wine, before casting the bones to the ground, which Estragon gleefully claims. Having been in a dumbfounded state of silence ever since the arrival of Pozzo and Lucky, Vladimir finally finds his voice to shout criticisms at Pozzo for his mistreatment of Lucky. Pozzo ignores this and explains his intention to sell Lucky, who begins to cry. Estragon takes pity and tries to wipe away Lucky's tears, but, as he approaches, Lucky violently kicks him in the shin. Pozzo then rambles nostalgically but vaguely about his relationship with Lucky over the years, before offering Vladimir and Estragon some compensation for their company. Estragon begins to beg for money when Pozzo instead suggests that Lucky can "dance" and "think" for their entertainment. Lucky's dance, "the Net", is clumsy and shuffling; Lucky's "thinking" is a long-winded and disjointed monologue—it is the first and only time that Lucky speaks. The monologue begins as a relatively coherent and academic lecture on theology but quickly dissolves into mindless verbosity, escalating in both volume and speed, that agonises the others until Vladimir finally pulls off Lucky's hat, stopping him in mid-sentence. Pozzo then has Lucky pack up his bags, and they hastily leave.

Vladimir and Estragon, alone again, reflect on whether they met Pozzo and Lucky before. A boy then arrives, purporting to be a messenger sent from Godot to tell the pair that Godot will not be coming that evening "but surely tomorrow". During Vladimir's interrogation of the boy, he asks if he came the day before, making it apparent that the two men have been waiting for a long period and will likely continue. After the boy departs, the moon appears, and the two men verbally agree to leave and find shelter for the night, but they merely stand without moving.

It is daytime again and Vladimir begins singing a recursive round about the death of a dog, but twice forgets the lyrics as he sings. Again, Estragon claims to have been beaten last night, despite no apparent injury. Vladimir comments that the formerly bare tree now has leaves and tries to confirm his recollections of yesterday against Estragon's extremely vague, unreliable memory. Vladimir then triumphantly produces evidence of the previous day's events by showing Estragon the wound from when Lucky kicked him. Noticing Estragon's barefootedness, they also discover his previously forsaken boots nearby, which Estragon insists are not his, although they fit him perfectly. With no carrots left, Vladimir is turned down in offering Estragon a turnip or a radish. He then sings Estragon to sleep with a lullaby before noticing further evidence to confirm his memory: Lucky's hat still lies on the ground. This leads to his waking Estragon and involving him in a frenetic hat-swapping scene. The two then wait again for Godot, while distracting themselves by playfully imitating Pozzo and Lucky, firing insults at each other and then making up, and attempting some fitness routines—all of which fail miserably and end quickly.

Suddenly, Pozzo and Lucky reappear, but the rope is much shorter than during their last visit, and Lucky now guides Pozzo, rather than being controlled by him. As they arrive, Pozzo trips over Lucky and they together fall into a motionless heap. Estragon sees an opportunity to exact revenge on Lucky for kicking him earlier. The issue is debated lengthily until Pozzo shocks the pair by revealing that he is now blind and Lucky is now mute. Pozzo further claims to have lost all sense of time, and assures the others that he cannot remember meeting them before, but also does not expect to recall today's events tomorrow. His commanding arrogance from yesterday appears to have been replaced by humility and insight. His parting words—which Vladimir expands upon later—are ones of utter despair. Lucky and Pozzo depart; meanwhile Estragon has again fallen asleep.

Alone, Vladimir is encountered by (apparently) the same boy from yesterday, though Vladimir wonders whether he might be the other boy's brother. This time, Vladimir begins consciously realising the circular nature of his experiences: he even predicts exactly what the boy will say, involving the same speech about Godot not arriving today but surely tomorrow. Vladimir seems to reach a moment of revelation before furiously chasing the boy away, demanding that he be recognised the next time they meet. Estragon awakes and pulls his boots off again. He and Vladimir consider hanging themselves once more, but when they test the strength of Estragon's belt (hoping to use it as a noose), it breaks and Estragon's trousers fall down. They resolve tomorrow to bring a more suitable piece of rope and, if Godot fails to arrive, to commit suicide at last. Again, they decide to clear out for the night, but again, they do not move.