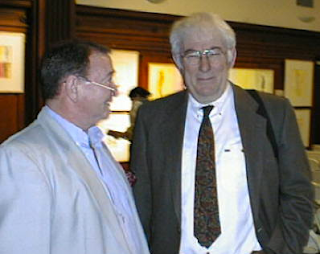 Bank of Ireland Arts Centre.
A Stroll Through Ulysses - an art exhibition by Roger Cummiskey. 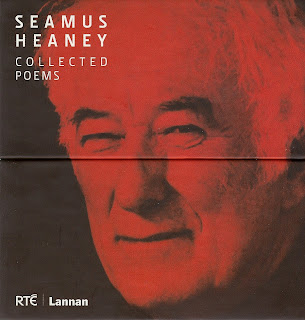 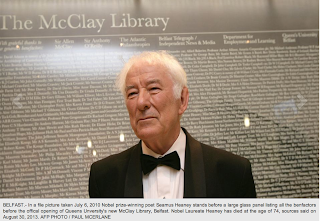 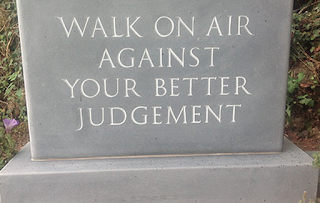 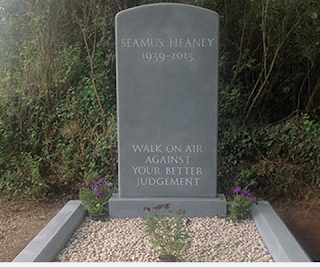 The lines are taken from his Nobel Prize speech in 1995. Responding to what the lines meant Heaney told the Harvard Crimson publication the following:
“A person from Northern Ireland is naturally cautious. You grew up vigilant because it’s a divided society. My poetry on the whole was earth-hugging, but then I began to look up rather than keep down. I think it had to do with a sense that the marvelous was as permissible as the matter-of-fact in poetry. That line is from a poem called “The Gravel Walks,” which is about heavy work—wheeling barrows of gravel—but also the paradoxical sense of lightness when you’re lifting heavy things. I like the in-betweenness of up and down, of being on the earth and of the heavens. I think that’s where poetry should dwell, between the dream world and the given world, because you don’t just want photography, and you don’t want fantasy either.”
Heaney was a professor at Harvard from 1981 to 1997 and its Poet in Residence from 1988 to 2006. From 1989 to 1994, he was also the Professor of Poetry at Oxford. His literary papers are held by the National Library of Ireland.
Robert Lowell described him as "the most important Irish poet since Yeats," and many others, including the academic John Sutherland, stated he was "the greatest poet of our age." Robert Pinsky has stated that "with his wonderful gift of eye and ear Heaney has the gift of the story-teller."
Upon his death in 2013, the Independent described him as "probably the best-known poet in the world."
Professor Kevin Whelan of Notre Dame remembered the greatest poet of his generation and his outstanding personal qualities.
“I first met Seamus Heaney in 1979 when I was a tutor at Carysfort College. He gave me sage advice then: “never let your job interfere with your work.”
“Ever since, he and I as countrymen in the city had a natural empathy. As his fame exploded, he always remained generous and accessible to me, as to hundreds or indeed thousands of others.
“I was in his house at Sandymount one morning when the postman arrived with what can only be described as a bag bursting under the weight of all the myriad of stuff in it - and that happened every day. He welcomed me into his home, did so many readings for me, he launched my book, he gifted me rare publications, he let me print broadsheets for good causes (especially Notre Dame) and best of all he shared with me his northern sense of humour - which people underestimated or didn't 'hear’ - an inexhaustible repertoire of winks, slags, puns, drolleries and double-edged comments.
“He was always available to those he regarded as genuinely interested in his poetry, what he called ‘hearteners’ of his work. With his death we have lost a great Irish man, a great poet and a great friend.”
Meanwhile the local priest Father Andy Dolan has revealed the grave has become a literary pilgrimage stop for poetry lovers from all over the world.
“It’s difficult to say how many people actually visit the grave as there’s no-one keeping an eye on it all the time but we have a visitor’s book and that gives us some indication of the huge numbers who visit regularly.
“They’re coming from all over the world, from New Zealand, the US and Japan and leaving messages in the book in different languages,” Dolan said.
He said the style of gravestone and the inscription was decided on by the poet’s family.
“I know they were keen to have it all in place before the second anniversary of his death,” Fr Dolan said.
~~~~~~~~
"My grandfather cut more turf in a day
Than any other man on Toner's bog.
Once I carried him milk in a bottle
Corked sloppily with paper. He straightened up
To drink it, then fell to right away

Nicking and slicing neatly, heaving sods
Over his shoulder, going down and down
For the good turf. Digging.

The cold smell of potato mould, the squelch and slap
Of soggy peat, the curt cuts of an edge
Through living roots awaken in my head.
But I've no spade to follow men like them.

Between my finger and my thumb
The squat pen rests.
I'll dig with it.”
- from "Digging", Death of a Naturalist.
http://www.irishcentral.com/Seamus-Heaneys-gravestone-epitaph-is-revealed.html

Nobel Laureate Seamus Heaney was renowned for his way with words. Below are a small fraction of the quotes which made him popular around the world.

“I can’t think of a case where poems changed the world, but what they do is they change people’s understanding of what’s going on in the world.” (This Week magazine, 2004)

“Walk on air against your better judgement.” (Nobel Lecture, 1995)

“If you have the words, there’s always a chance that you’ll find the way.”

“History says, don’t hope ....
But then, once in a lifetime
The longed-for tidal wave.
Of justice can rise up,
And hope and history rhyme” (The Cure at Troy, 1991)

“Anyone with gumption and a sharp mind will take the measure of two things: what’s said and what’s done.” (Beowulf: A New Verse Translation, 2001)

“At home in Ireland, there’s a habit of avoidance, an ironical attitude towards the authority figure.”

“Poetry cannot afford to lose its fundamentally self-delighting inventiveness, its joy in being a process of language as well as a representation of things in the world.” (The Redress of Poetry, 1990)

“Even if the hopes you started out with are dashed, hope has to be maintained.”

And some time make the time to drive out west

Into County Clare, along the Flaggy Shore,

In September or October, when the wind

And the light are working off each other

So that the ocean on one side is wild

With foam and glitter, and inland among stones

The surface of a slate-grey lake is lit

By the earthed lightning of a flock of swans,

Their feathers roughed and ruffling, white on white,

Tucked or cresting or busy underwater.

Useless to think you’ll park and capture it

More thoroughly. You are neither here nor there,

A hurry through which known and strange things pass

As big soft buffetings come at the car sideways

And catch the heart off guard and blow it open..

What makes Irish Writers so good? 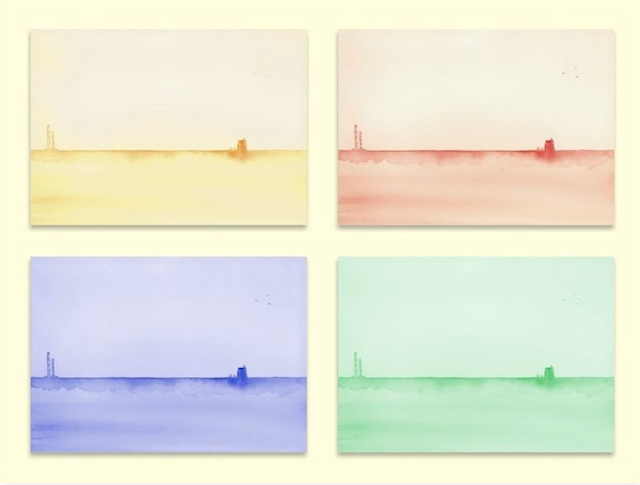