A Painting of a Young Poet: by Roger Cummiskey

A Painting of a Young Poet:

Bury me in the old church-yard

O, we got a good breath of ozone round the Head today

A thimbleful, just to whet your appetite, they say.

Carrickmines, Stradbrook, no more battles on the rocks.

They would meet quietly as if they had known each other

And made their tryst in some more secret place.

He would fade into something impalpable

Under her eyes and then in a moment he would be transfigured.

The telegraphpoles held the galloping notes

Of music between the punctual bars.

The sunlight breaking suddenly on his sight

Turned the sky and clouds into a fantastic world

Of sombre masses with lakelike spaces of dark rosy light.

He wanted to sin with another of his kind

A cry for an iniquitous abandonment.

In the silence their dark fire kindled the dusk

Into a tawny glow.

What doth it profit a man to gain the whole world

If he suffer the loss of his immortal soul?

His soul was fattening and congealing into a gross grease

Grazing out of darkened eyes, helpless, perturbed and human

For a bovine god to stare upon.

It would rain forever, noiselessly

All life would be choked off, noiselessly.

Noiselessly floating corpses amid the litter of the wreckage of the world.

Lucifer, non serviam: I will not serve.

Time is, time was, but time shall be no more!

The greatest torment, poena damni, the pain of loss.

His destiny was to be elusive of social and religious orders.

Destined to learn his own wisdom apart from others

To learn the wisdom of others wandering among the snares of the world.

A day of dappled seaborne clouds.

Words, was it their colours?

No, the poise and balance of the period itself.

A living thing, new and soaring and beautiful,

He was alone and young and wilful and wildhearted

Low and faint and whispering, faint as the bells of sleep;

A faint flame trembled on her cheek.

I hope I am not detaining you

This race and this country and this life

Produced me. I shall express myself as I am.

Art is the human disposition of sensible or

Intelligible matter for an esthetic end.

A soft liquid joy, the soft space of silent spaces

Of oceanic silence, of swallows flying through

The seadusk over the flowing waters.

The stout student who stood below farted briefly.

Did an angel speak?

Darkness falls from the air

Brightness falls from the air.

I will not serve

I go to encounter for the millionth time the reality of experience.

Compiled from "A Portrait of the Artist as a Young Man"  (James Joyce). 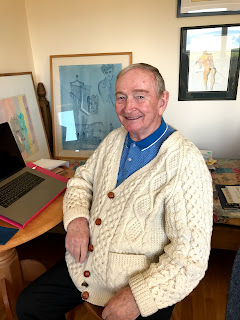 compilation from James Joyce painting of a young poet poem