Gas from a burner by James Joyce.

Joyce started writing the poem in the railway station waiting room in Flushing (Vlissingen) in the Netherlands on his way from Dublin to Trieste, and he completed it between there and Salzburg. He had it printed in Trieste and sent copies to Dublin for distribution there. He gave it the dateline ‘Flushing, September 1912.’

After hearing that the already printed pages of Dubliners were to be destroyed, Joyce left Dublin for the last time on 12 September. He stopped over in London long enough to offer the manuscript of Dubliners to Charles Boon, of publishers Mills & Boon. Mills & Boon published books by Padraic Colum who had written in advance to recommend Joyce’s book. But Joyce was not hopeful. Boon told him he had read about the references to King Edward in Dublinersand said he wouldn’t care to publish something like that.

Joyce’s anger at the destruction of Dubliners had not abated by the time he got to the Netherlands, and while waiting for the train to Salzburg he took the opportunity to start drafting a ‘pasquinade,’ a satire or lampoon, on the back of his now worthless Dubliners contract with Maunsel & Company.

Joyce had the poem printed in Trieste and sent copies to his brother Charles in Dublin for him to distribute. Charles showed it to John Joyce who declared angrily that Joyce was ‘an out and out ruffian.’ Given his father’s reaction, Charles was reluctant to go about circulating the poem any further.

Joyce seems to have started out writing the poem from the point of view of John Falconer, the Dublin printer who had printed and destroyed Dubliners, but later mixed Falconer’s perspective with the perspective of George Roberts, manager at Maunsel and Company.

The poem is a much more personal rant than Joyce’s earlier poem ‘The Holy Office,’ and the language is much stronger. He includes elements of Swiftian scatology, and his invective is turned not only against Roberts and Falconer but also against other writers, James Cousins, Padraic Colum, JM Synge, and Lady Gregory among them. 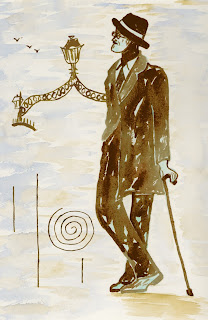 Gas from a Burner
by James Joyce

Ladies and gents, you are here assembled
To hear why earth and heaven trembled
Because of the black and sinister arts
Of an Irish writer in foreign parts.
He sent me a book ten years ago.

I read it a hundred times or so,
Backwards and forwards, down and up,
Through both the ends of a telescope.
I printed it all to the very last word
But by the mercy of the Lord
The darkness of my mind was rent
And I saw the writer's foul intent.
But I owe a duty to Ireland:
I held her honour in my hand,
This lovely land that always sent
Her writers and artists to banishment
And in a spirit of Irish fun
Betrayed her own leaders, one by one.
'Twas Irish humour, wet and dry,
Flung quicklime into Parnell's eye;
'Tis Irish brains that save from doom

The leaky barge of the Bishop of Rome
For everyone knows the Pope can't belch
Without the consent of Billy Walsh.
O Ireland my first and only love
Where Christ and Caesar are hand and glove!
O lovely land where the shamrock grows!
(Allow me, ladies, to blow my nose)

Where they talk of 'bastard', 'bugger' and 'whore'
And a play on the Word and Holy Paul
And some woman's legs that I can't recall

Written by Moore, a genuine gent
That lives on his property's ten per cent:
I printed mystical books in dozens:
I printed the table-book of Cousins
Though (asking your pardon) as for the verse
'Twould give you a heartburn on your arse:
I printed folklore from North and South
By Gregory of the Golden Mouth:
I printed poets, sad, silly and solemn:
I printed Patrick What-do-you-Colm:
I printed the great John Milicent Synge
Who soars above on an angel's wing
In the playboy shift that he pinched as swag

From Maunsel's manager's travelling-bag.
But I draw the line at that bloody fellow
That was over here dressed in Austrian yellow,
Spouting Italian by the hour
To O'Leary Curtis and John Wyse Power
And writing of Dublin, dirty and dear,
In a manner no blackamoor printer could bear.
Shite and onions! Do you think I'll print
The name of the Wellington Monument,
Sydney Parade and Sandymount tram,
Downes's cakeshop and Williams's jam?
I'm damned if I do-- I'm damned to blazes!
Talk about _Irish Names of Places!_

It's a wonder to me, upon my soul,
He forgot to mention Curly's Hole.
No, ladies, my press shall have no share in
So gross a libel on Stepmother Erin.
I pity the poor-- that's why I took

A red-headed Scotchman to keep my book.
Poor sister Scotland! Her doom is fell;
She cannot find any more Stuarts to sell.
My conscience is fine as Chinese silk:
My heart is as soft as buttermilk.

Colm can tell you I made a rebate
Of one hundred pounds on the estimate
I gave him for his Irish Review.
I love my country-- by herrings I do!

I wish you could see what tears I weep
When I think of the emigrant train and ship.
That's why I publish far and wide
My quite illegible railway guide,
In the porch of my printing institute
The poor and deserving prostitute
Plays every night at catch-as-catch-can
With her tight-breeched British artilleryman
And the foreigner learns the gift of the gab
From the drunken draggletail Dublin drab.
Who was it said: Resist not evil?
I'll burn that book, so help me devil.
I'll sing a psalm as I watch it burn
And the ashes I'll keep in a one-handled urn.
I'll penance do with farts and groans
Kneeling upon my marrowbones.
This very next lent I will unbare
My penitent buttocks to the air
And sobbing beside my printing press
My awful sin I will confess.
My Irish foreman from Bannockburn
Shall dip his right hand in the urn
And sign crisscross with reverent thumb
Memento homo_ upon my bum.