Showing posts from January, 2010
Show All

Music by the fiddler from the Netherlands.
Frits G. Gompen.

So you’re an Artist! 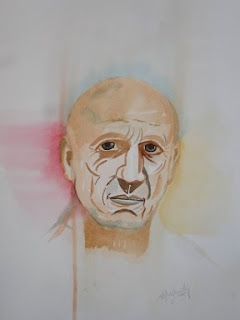 I spent a few hours and met an English guy called Joe in the bar where I watched Leinster and London Irish knock the living daylights out of each other on Saturday in the Heineken Cup rugby match.

The bar is in Fuengirola and has Sky TV and luckily on a day when it was bucketing down outside and the wind was howling, the Missuses umbrella had done an inside out turn and wanted to head off to warmer climes, they had the heating on and a choice of leaving the door open or closed. The trouser legs were wet from the knees down but I did not mind. The hot in the winter and cold in the summer heater would soon solve that problem.

At half time I took a stroll around the pub looking at the pictures and photographs hanging on the walls. Well it was more of a shuffle as the pub is quite small and the lights low. Now the place was not full. In fact there were only three others and the two staff members who turned up the music during half time just in case we wanted to lis…
Post a Comment
Read more 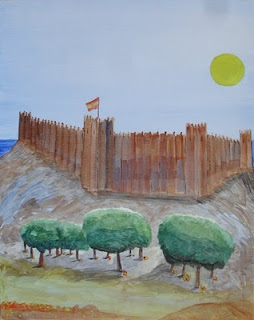 Culture
MEET THE ARTISTS IN FUENGIROLA.

Elaine Carlton and Roger Cummiskey are Members of the Andalusian International Artists Group (aia-group.net) formed over 5 years ago by artists from all over Europe and the USA.

Elaine will be displaying a range of her recent work at the NIXS Galería Avda Condes de San Isidro 50 (between Zara and Policía Local) in Fuengirola, much of which is inspired by and reflects her love of Andalucía. Her work uses a range of textile techniques and media and an excess of fibres and threads.

In this exhibition Rogers also shows images in Oil and Watercolour based on local and sea scenes reflecting the everyday imagery of the area and as Saint Valentine´s Day is just around the corner you might like to surprise a loved one with a special gift.

You can meet both artists at 6pm next Tuesday 2 February. The exhibition will run through to 22 February. Opening times 11am to 2pm and 5pm to …
Post a Comment
Read more


Last Saturday a man and his wife asked me about one of my paintings from my James Joyce series. They were very English with that sort of accent of yesteryear one does not hear too often around the Costa del Sol. I was a little surprised when they told me that they had lived in Dublin and went to Trinity College back in the 1950s.

Trinity College is the old Alma Mater of Samuel Beckett the Nobel Prize winner in Literature. James Joyce was a graduate of University College, Dublin, part of the National University of Ireland. Joyce and Beckett struck up a friendship in the 1920s in Paris. Beckett acted as Secretary to Joyce for some time while Joyce was writing Finnegans Wake. Both were Dubliners. So am I.

I was curious, however, as to why this older English couple were so interested in the painting the title of which is “Good Puzzle would be to Cross Dublin without passing a Pub!” They became animated as the painting has about 20 pubs names on it that trade today…
Post a Comment
Read more 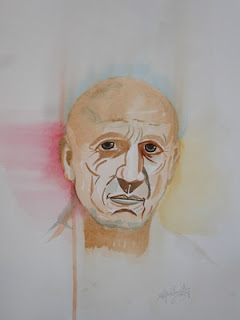 Ten original watercolour paintings by Roger based on the writings of Miguel de Cervantes and others.
Post a Comment
Read more 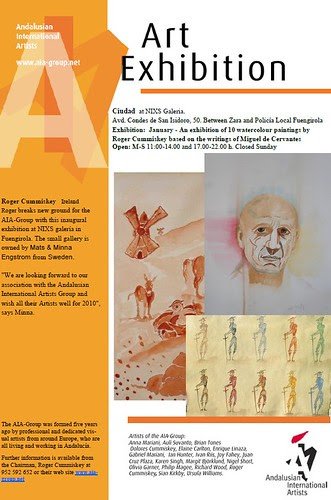 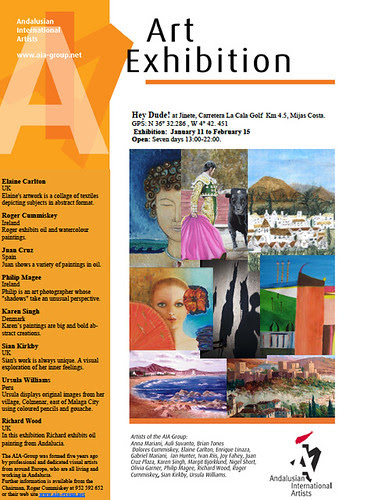 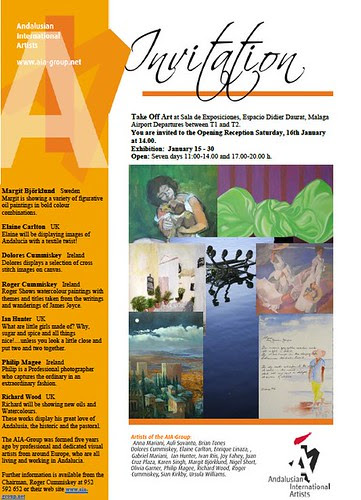 Switch off all electronic equipment.

Margit Björklund from Sweden
Roger Cummiskey, Dolores Cummiskey and Philip Magee from Ireland,
Elaine Carlton, Richard Wood and Ian Hunter from the UK, all members of the Andalusian International Artists Group, exhibit a selection of their artworks.

Margit displays original oil paintings capturing natures fascinating explosion in colour and form during the very hot and relaxed summer on the Costa del Sol. The light, the colours and the scents in southern Spain are great sources of inspiration.

The Best of Marbella


Here is some information on Maria the owner and organizer of The Best of Marbella blog. Click here!

Pop along for a look around.