Showing posts from February, 2009
Show All

At the end of last year I did a charcoal drawing of the new Taoiseach, Brian Cowan, framed it up and put it on display in Beckitts Restaurant in Marbella that is frequented by many Irish holiday makers.

I have now been asked to take it down and replace it with another picture as the customers get upset when they see it, preferring not to be reminded of Mr Cowan's current handling of the affairs of the country while they are on their holliers. Apart from which some think that it doesn't look like Mr Cowan, but this is normal.

However, despite unprecedented dissatisfaction with the Government, people are divided over whether there should be a General Election to form a new government with a mandate to steer the economy out of recession. (A new Irish Independent/Millward Brown IMS poll Feb 26 2009)

Nowhere is Fianna Fail's demise more evident than in the capital, where the pa…
Post a comment
Read more

You are in Madrid.


Yes, I know that I have been distracted but the main reason for going to Madrid was to see the Francis Bacon exhibition at the Prado Museum. Also I had never been to Madrid before and I sure got lots of pleasant surprises.


We were able to walk from the Atocha Railway station with its 4,000 m² covered tropical garden to our hotel, The Carlton.


A number 27 or 45 bus from across the road took us the few stops to the Prado. The cost - €1.00 each way. While in Madrid we took no taxis or metros as it was not necessary. The bus service was brilliant and easy to follow. It was also possible to walk to most of the places that we wished to see.


Let me firstly deal with the Museo del Prado


The Prado is one of the most important art museums in Europe and amongst the best in the world. The collection includes sculptures, drawings, paintings and other art objects. The Villanueva building houses Spanish paintings from romantic to 19th century styles, as well as important…
Post a comment
Read more 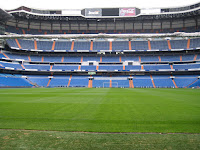 I really wouldn't have gotten away with discussing what happened in advance with my wife but it turned out that she was equally impressed. Not sure if it had something to do with the Real Madrid Goalie!

We arrived on a Monday afternoon in Madrid and took the City Tour Bus and got off at the home ground of Real Madrid football club as most of the art galleries were closed on Mondays and it also gave us an opportunity to see the landmarks of the city.

The ground holds over 80,000 spectators and is simply enormous. Here is a view of the pitch and also where the players and substitutes sit. Inside the Club there is an exhibition area absolutely stuffed with Memorabilia and history of the most famous football club in the World.

Real Madrid went on to beat Real Betis in La Liga the following Saturday, after I had blessed the pitch, by 6-1. Yes, that's six goals to one!

They didn't do too well the following week however, when Liverpool took them …
3 comments
Read more 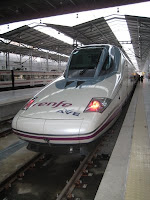 My first trip to Madrid.

We leave Fuengirola station at 08:45 and one hour later we arrive in Malaga to catch the 09.00 high speed train to Madrid. There is security and x-raying of bags. I find this a bit unexpected for a train.

However, calmly and unrushed we took our pre-booked seats and sat back. We were off smoothly.

An attendant came round with a set of headphones. By 09.10 we are passing mountains on our left and agricultural land on our right. The area is dotted with houses and the occasional white pueblo. We are travelling at 186 km hr. The temperature is 14 degrees.

A movie, Charlie Wilson has started. I pass but understand that it can be watched in English with Spanish subtitles. There is a language choice.

We are now in a long tunnel after which as we emerge we see plenty of olive tree plantations, green fields and greenish brown hillsides that remind me of another country.

These two watercolour paintings were completed during February 2009 and are available exclusively through www.Barebrush.com out of NY.
Post a comment
Read more