I see that Aretha Franklin died. 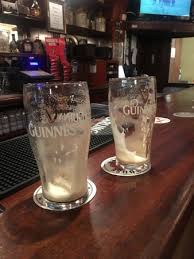 -All those songs. Jesus, man, she was amazin’.

-Yeah, yeah. I met the missis when there was an Aretha song playin’ – did I ever tell yeh?

-Hang on now – fuck off. Every time a singer dies you tell me you met your missis at one of their gigs or a dance.

-You don’t really know me wife. But I’ll tell yeh. You’re never goin’ to woo a woman like tha’ in one three-minute song.

-Yeah – fuckin’ woo. It was never love at first sight, like. It was more like love at twenty-seven fuckin’ sights. I had to win her over. An’ that’s where Aretha comes in.

-There was a club, a room over a pub, like – just off Capel Street. I can’t remember wha’ it was called. But they only played soul.

"Your Queenship, “he asked her. “I am finding things way more difficult than I could have imagined. May I ask you - how do you run such an efficient government? Are there any tips you can give me?”

“Well," replied Her Majesty, "the most important thing is to surround yourself with intelligent people."

Trump frowned.
"But how do you know the people around you are really intelligent?" he asked.

"Oh, that's easy” the Queen replied. “You just ask them to answer an intelligent riddle.”

She pushed a button on her intercom. “Please send Theresa May in here."

The Prime Minister walked into the room.

“You called for me, Your Majesty?"
"Answer me this, if you would, Theresa. “ the Queen said. “Your mother and father have a child. It is not your brother and it is not your sister. Who is it?”
Without pausing for even a second, Theresa May answered, “That would be me."

Trump went back home, returned to the White House and the very next day called for Mike Pence to come and see him.
Pence duly trotted in to the Oval Office.

“Mike, answer this for me," said the Don. “Your mother and your father have a child. It's not your brother and it's not your sister. Who is it?”

Pence went panicking off to his advisers and asked everyone, but none of them could give him an answer.

The next night, as it happened, Pence ran in to Hillary Clinton in a restaurant. By now, desperate for an answer to give to his tyrannical boss, he approached her – much to her surprise.

“Hillary, I know we haven’t always seen eye to eye but I would really appreciate it if you could answer this riddle for me.

“Thanks, said Pence,” It’s this. Your mother and father have a child and it's not your brother or your sister. Who is it?”

Hillary answered right back, “That's easy, it's me!"

Pence then went back to speak with Trump. "Say, boss, I did some research and I have the answer to that riddle. It’s Hillary Clinton.”

Trump got up, stomped over to Pence, and angrily yelled at him. "No, you idiot! It’s Theresa May!"

AND THAT, MY FRIENDS, IS PRECISELY WHAT'S GOING ON AT THE WHITE HOUSE