TO THE PEOPLE OF IRELAND

IRISHMEN AND IRISHWOMEN: In the name of God and of the dead generations from which she receives her old tradition of nationhood, Ireland, through us, summons her children to her flag and strikes for her freedom.
Having organised and trained her manhood through her secret revolutionary organisation, the Irish Republican Brotherhood, and through her open military organisations, the Irish Volunteers and the Irish Citizen Army, having patiently perfected her discipline, having resolutely waited for the right moment to reveal itself, she now seizes that moment, and supported by her exiled children in America and by gallant allies in Europe, but relying in the first on her own strength, she strikes in full confidence of victory.
We declare the right of the people of Ireland to the ownership of Ireland and to the unfettered control of Irish destinies, to be sovereign and indefeasible. The long usurpation of that right by a foreign people and government has not extinguished the right, nor can it ever be extinguished except by the destruction of the Irish people. In every generation the Irish people have asserted their right to national freedom and sovereignty; six times during the past three hundred years they have asserted it in arms. Standing on that fundamental right and again asserting it in arms in the face of the world, we hereby proclaim the Irish Republic as a Sovereign Independent State, and we pledge our lives and the lives of our comrades in arms to the cause of its freedom, of its welfare, and of its exaltation among the nations.
The Irish Republic is entitled to, and hereby claims, the allegiance of every Irishman and Irishwoman. The Republic guarantees religious and civil liberty, equal rights and equal opportunities to all its citizens, and declares its resolve to pursue the happiness and prosperity of the whole nation and of all its parts, cherishing all of the children of the nation equally, and oblivious of the differences carefully fostered by an alien Government, which have divided a minority from the majority in the past.
Until our arms have brought the opportune moment for the establishment of a permanent National Government, representative of the whole people of Ireland and elected by the suffrages of all her men and women, the Provisional Government, hereby constituted, will administer the civil and military affairs of the Republic in trust for the people.
We place the cause of the Irish Republic under the protection of the Most High God, Whose blessing we invoke upon our arms, and we pray that no one who serves that cause will dishonour it by cowardice, inhumanity, or rapine. In this supreme hour the Irish nation must, by its valour and discipline, and by the readiness of its children to sacrifice themselves for the common good, prove itself worthy of the august destiny to which it is called.
Signed on behalf of the Provisional Government:

There's lots going on at Academy House. Visit our website and take a look around.

To mark the centenary of the 1916 Easter Rising, a gift for the people of the world - a free eBook of 1916 Portraits and Lives - has been produced.

The book’s 42 biographies of selected figures from the Rising were chosen from the Royal Irish Academy’s extensive Dictionary of Irish Biography, which outlines the lives at home and abroad of prominent men and women born in Ireland, as well as the noteworthy Irish careers of those born outside Ireland.
The eBook gift is an initiative by the Royal Irish Academy, the Office of Public Works, the Department of Foreign Affairs and Trade and Ireland 2016.
These fascinating biographies, edited by Lawrence William White and James Quinn, are depicted alongside artist David Rooney’s exceptional scraper-board illustrations.

A concert to honour Sean MacDiarmada and other heroes of the 1916 Rising.
"A Terrible Beauty". Commissioned by Gael Linn.

RTE introduction to Easter Celebrations of the 100th Anniversary.

Some Images from the event. 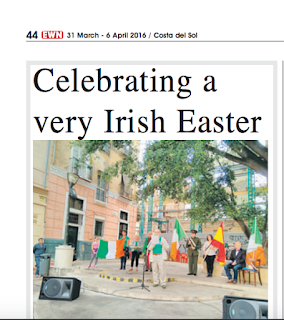 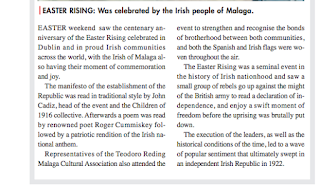 Lowering of the Irish and Spanish flag in the center of Malaga.
The Irish flag flies in Malaga 2016.

To the people of Ireland. Ireland summons her children to her flag.

Spokesman for the 'Children of 1916' committee said “This is a momentous occasion that we celebrate - the Proclamation of the Republic of Ireland - on Easter Sunday 1916".

It is an opportunity to gather with fellow Irishmen and women to proudly acknowledge the sacrifice of a small but brave handful of revolutionaries at the General Post Office in Dublin one hundred years ago.  Similar commemorations will take place throughout the World.

As Irish Malagueños we are humbled to have been welcomed into the fabric of such a rich and tolerant  community.

Further information is available from the web site www.FACEBOOK.com/pascua1916.

The format will be:

Reading of the Proclamation in English and Spanish.

Reciting of a poem by W B Yeats in English and Spanish. Roger Thomas Cummiskey.

Reading of the names of the 16 executed leaders. Jimmy Nolan.

One minute silence. The dipping of the flags.

Closing with the Irish national anthem.

Followed by drinks, music and tapas  in La Tranca bar, across the road to the event.

Irish and Spanish gather to Commemorate.


On Easter Sunday, 27 March 2016 Malaga joined many other major cities around the world by hosting an event commemorating the 100th anniversary  of the 1916 Irish Uprising.

The day was a tremendous success, attracting, not only the Irish community   but also a strong turnout of Malagueños who have always made the Irish feel a welcome addition to its rich culture.

'The Children of 1916' committee would like to thank the SUBDELEGACIÓN DEL GOBIERNO EN MALAGA (Sub delegation of the Spanish Government in Malaga) for its support to hold the 100th Anniversary commemoration of the 1916 Irish Uprising.
We appreciate that its support especially during Semana Santa, was extraordinarily kind, given the logistical nightmare that was already involved.

The Children of 1916 committee thank all who attended.

A short closing video to the music of the Foggy Dew.

I have met them at close of day
Coming with vivid faces
From counter or desk among grey
Eighteenth-century houses.
I have passed with a nod of the head
Or polite meaningless words,
Or have lingered awhile and said
Polite meaningless words,
And thought before I had done
Of a mocking tale or a gibe
To please a companion
Around the fire at the club,
Being certain that they and I
But lived where motley is worn:
All changed, changed utterly:
A terrible beauty is born.

That woman's days were spent
In ignorant good will,
Her nights in argument
Until her voice grew shrill.
What voice more sweet than hers
When young and beautiful,
She rode to harriers?
This man had kept a school
And rode our winged horse.
This other his helper and friend
Was coming into his force;
He might have won fame in the end,
So sensitive his nature seemed,
So daring and sweet his thought.
This other man I had dreamed
A drunken, vain-glorious lout.
He had done most bitter wrong
To some who are near my heart,
Yet I number him in the song;
He, too, has resigned his part
In the casual comedy;
He, too, has been changed in his turn,
Transformed utterly:
A terrible beauty is born.

Hearts with one purpose alone
Through summer and winter, seem
Enchanted to a stone
To trouble the living stream.
The horse that comes from the road,
The rider, the birds that range
From cloud to tumbling cloud,
Minute by minute change.
A shadow of cloud on the stream
Changes minute by minute;
A horse-hoof slides on the brim;
And a horse plashes within it
Where long-legged moor-hens dive
And hens to moor-cocks call.
Minute by minute they live:
The stone's in the midst of all.

Too long a sacrifice
Can make a stone of the heart.
O when may it suffice?
That is heaven's part, our part
To murmur name upon name,
As a mother names her child
When sleep at last has come
On limbs that had run wild.
What is it but nightfall?
No, no, not night but death.
Was it needless death after all?
For England may keep faith
For all that is done and said.
We know their dream; enough
To know they dreamed and are dead.
And what if excess of love
Bewildered them till they died?
I write it out in a verse --
MacDonagh and MacBride
And Connolly and Pearse
Now and in time to be,
Wherever green is worn,
Are changed, changed utterly:


A terrible beauty is born.

Read on Video in English.

Read on Video in Spanish.