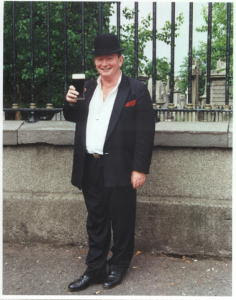 Outside the Gravediggers Pub in Glasnevin in following the funeral of poor Willy Dignam. http://www.rogercummiskey.com/ 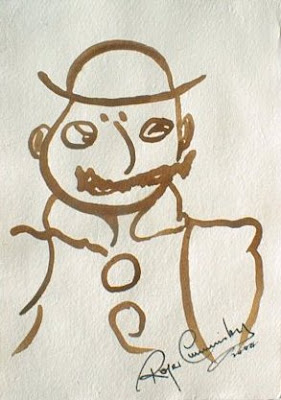 Bloomsday - June 16th - is an annual celebration among James Joyce fans throughout the world, from Fort Lauderdale to Melbourne. It is celebrated in at least sixty countries worldwide, but nowhere so imaginatively, of course, as in Dublin, Ireland where Joyce was born and about which he wrote extensively.

The novel, Ulysses, by James Joyce recounts the hour-by-hour events of one day in Dublin - June 16, 1904 - as an ordinary Dubliner, Leopold Bloom, wends his way through the urban landscape, the odyssey of a modern-day Ulysses. This year celebrates the 104th anniversary.

Dedicated and not so dedicated followers of James Joyce and his writings have some fun on Bloomsday – which now can stretch to Blooms week – dressing up in garb of the period, reading passages from Ulysses, knocking back copious amounts of alcohol and chatting about probably one of the best known novels in the World, few people have read and many not understood! Daft but fun!

This painting is from James Joyce’s caricature of Leopold Bloom, drawn in Myron Nutting’s studio in the 1920’s.

My paintings on James Joyce themes can be seen at the House of the Dead , 15 Ushers Island, .